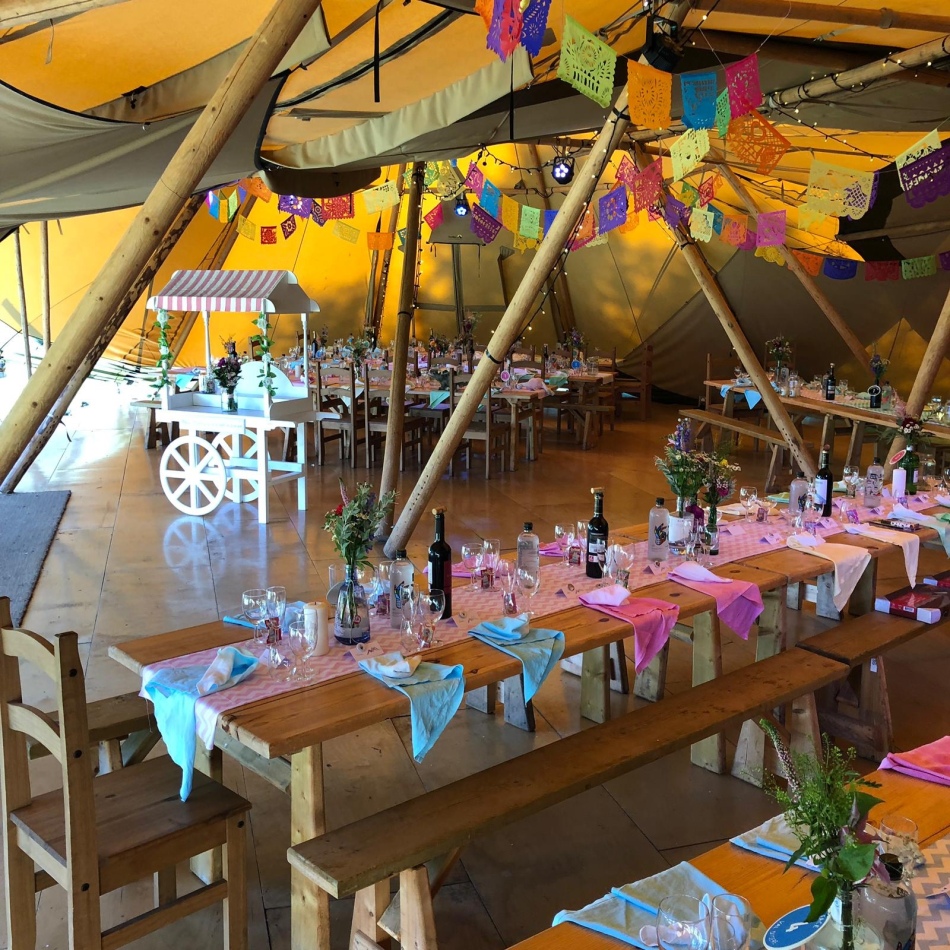 We got up at 7.30 and we were both mentally exhausted from the week. Planning a wedding where you have to bring in absolutely everything is so hard. Our wedding day set up was a labour of love, blood sweat and tears. Except on the Tuesday when we legally tied the knot we didn’t really have any time for ourselves. I stayed up each night making bits and bobs. Gav was on the computer sorting out music and checking off lists.

It was more than a full time job.

The night before I was cutting out the name cards on my Cricut, it made it easier but I still had to cut out 140 name cards 6 to a sheet. I ran out of the house at 8.30 to get to the shops when they opened and picked up a few more bits or the toilet boxes. ( I will explain in a later blog)

Then my brother arrived at 10.30 with the van he had to hire because we had so much stuff. The cake was a bit of an after thought so we precariously sat it on top and it fared well.

The last thing we packed was my wedding dress and though all the mad packing we almost left It behind. We had paid for our cleaner to clean for us so we came home to a nice clean house. She was already there when we left and promised to bring anything if we forgot it.

I hadn’t packed the top table tablecloth but we just got on with it!

Chris drove to the venue with me Gav and Frank on board plus the majority of the props and bits we needed for the day. When we arrived we unloaded the van. This bit was a bit disorganised and people came to me asking what they wanted to do. We piled it all on the grass and tried to get started from there.

I had dreams of clipboards and lists but none of that happened!

My brother in law set to work hanging our Mexican wedding flags which looked truely beautiful! We still have some left which I am excited to keep for a party! And also he and my dad hung some streamers behind us so the top table had a pretty back drop.

I changed the seating arrangement at the last minute so we had one kind top table and then six lines of 2 which worked out beautifully.

Give me a job

My sister took charge of the tables. She said she was going to set up one and we can work from there. The theme for the seating was snowboarding. The tables were supposed to be slopes

I left the top tables table clothes at home still not found! Great. So I just used the ends of the longer ones to make our top table. It didn’t bother me!

I had so many good people come up to me and say give me a job! We dressed the first table then the second then the third.

Charlotte and my mum were busy making the table flowers. We used a lot of gin bottles to use instead of vases and they looked so pretty!! I asked Charlotte for bright happy flowers with lots of colour, Dahlias, sweet Williams and daisies but what she did was so incredible they were perfect. I will do a whole blog on how amazing she was later!

I bought the Table cloth fabric of eBay and dyed all the napkins myself. I didn’t want black napkins so I used a yellow dye to brighten things up. I had 120 guests and made sure I had a spare 30 napkins. I was so proud of them they looked great. I had a vision of how I wanted it to look and everyone who was there helped me achieve it.

After Vicky laid out the table Becky went through and straightend the edges. Sorting out the napkins ( Vicky folded them beautifully ina loopy way) and we had to repeat it 120 times. I didn’t want too many flowers on the table because of the food going in the middle of the table.

I bought wooden discs and made slope markers from all our favourite places, Val Disere, Chamonix , Le Duce Alps it was so hard finding photos of the markers that I had to make a few from scratch but they came out so well! We tied them the bottles.

I was going to make a seating chart but in the end I just let people find their names. It was an open venue so after the ceremony people could go in and out while they waited so it wasn’t a big deal. Also because a quarter of the wedding helped set up they found where they were sitting.

The name cards were all cut out on my Cricut. I drew a silly mountainscape and cut out that shape on the card. Charlotte being a super star made badges for everyone. We had 3 themes for our badges, Star Wars, Harry Potter and Snowboarding. We attached the badges at the top with foam squares.

Whilst we were dressing the tables my brother and his wife where folding and hand writing our peoples names!

I told you it was a team effort!

Gavs mum was in the chiller van organising the food and booze. Rosco (papa smurf) was setting up the signs helping gav with the beer. I don’t want to miss anyone out. But there was a lot of hands on deck.

Hayley arrived later with another car full of bits! We had flags of all the countries where our family’s live to semi cover the bales of hay. Charlotte used the excess bottles and flowers and put them at the end of the hay bales.

My dad cooked dinner for everyone! All the men gathered round the fire and had to test the booze while the rest of us soldiered on. I stopped when I realised I was tired and wanted to enjoy myself. It was about 8pm at this point!

So it was all sorted with just a few tweaks to do the next day! We enjoyed the evening, had a few cheeky drinks and went to bed early!

That was the set up. A massive thank you to everyone involved you have no idea how great full we both are.

It was a mission but it was worth it.

0 comments on “Our wedding day set up!”